A neighborhood ice-cream seller gets support from community

Chicago, IL– A special Father’s Day weekend led to 70-year old Don Rosario selling all of his paleta’s to a local Southeast side family. The family bought his entire cart of Mexican style ice-cream as a kind gesture to get the elderly man out the heat and to go relax back home.

Originally, a native of Zacatecas, Mexico, Rosario Del Real devoted his time carpentry until he suffered from an unfortunate injury. Always remaining optimistic he often sought other ways of income and purpose. Pushing his cart for nearly 50 years throughout his neighborhood, he is often recognized for his cowboy apparel and frozen sweet treats.

” I don’t like to sit at home doing nothing and without a purpose”,  Rosario tells the Chicago Tribune.

Easily spotted by neighbors as he takes pride in Western culture as he is often sporting a cowboy hat, snakeskin boots, and his vaquero suit that shows his admiration for his heritage. 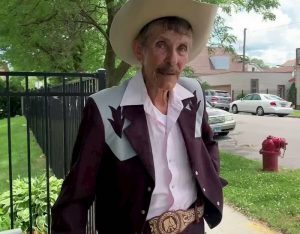 The holiday formed around the appreciation of Father’s throughout the world had an impactful response from two local neighbors of Rosario.

Following his usual route, Don Rosario encountered the home of Oscar Gonzalez and Victor Dominguez, who were outside having a bbq. They called over Rosario in efforts to make small talk, and make a purchase.

After a short time, the two men decide to buy all the paleta’s from the salesman and encouraged him to go home and rest. The exchange was recorded by a friend of the two men and went viral on Tiktok.

According to WGN9news, the family of Dominguez and Gonzales started a GoFundMe campaign shortly after their encounter with Rosario, in hopes to get Rosario enough to retire. With an initial goal of $10,000, after watching the video strangers from all over the world have contributed to the campaign, and helped raise nearly $60,000 for the man.

But, Rosario says he will continue to work because of the satisfaction it brings him. The heartfelt gesture overwhelmed Rosario, and he has shown his gratitude to many through his viral Tiktok videos. He hopes to return to his hometown in Zacatecas, to visit the Lady of Shrine to thank her for all of the strangers that have contributed to his early retirement.

Watch it here on video