Crossing the United States on a bike trail!

A coast-to-coast hike and bike trail is coming to the United States.

The non-profit organization, Rails-to-Trails-Conservancy (RTC), is building the largest bicycle path the United States has ever seen! It is the “Great American Rail-Train”. Since 2016, it has been bringing together private and public funding to carry out this huge initiative. The idea has been in the air for 50 years, and “determining the route has been a 30-year journey,” says Brandi Horton, RTC’s Vice President of Communications. 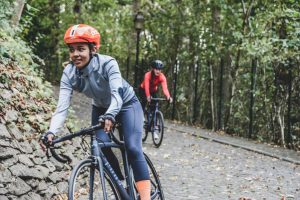 Currently, 52% of the routes, or 2,000 miles, have been completed. The trail will span 3,700 miles and cross 12 states, from Washington DC to Seattle. It will connect more than 145 existing trails, promising a unique experience along the peaks and abandoned rail lines. Users can hike, bike, or walk. This scenic trail offers an exploration rich in history and culture. The route passes through places emblematic of American revolutionary and industrial times; for example, in Maryland, cyclists and walkers can sleep in 19th-century locks. Cultural discoveries are also on the agenda; notably by crossing the Amish lands of Holmes County, or the region of the Coeur d’Alene Native American tribe. Also, the trail begins in Washington DC next to the National Mall where the Washington Monument, the Lincoln Memorial, and the Capitol Building are located.

Fostering nature and the economy

During the pandemic, Americans have favoured outdoor and remote activities. According to RTC, the use of trails has increased by 200% this spring. One in six Americans live within 50 miles of this hiking circuit. As a result, thousands of people will be encouraged to spend more time outdoors in the fresh air. The RTC also promises rich economic benefits with the development of lucrative services close to the route. According to the organization, $138 billion could be generated and will benefit local economies and businesses along the trail. In addition to the financial gains, there is an educational aspect to the trail. It teaches about the history of the country and reveals little-known communities and cultures. The Great American Rail-Train is a way to get away from big cities and enjoy environmentally-friendly activities.