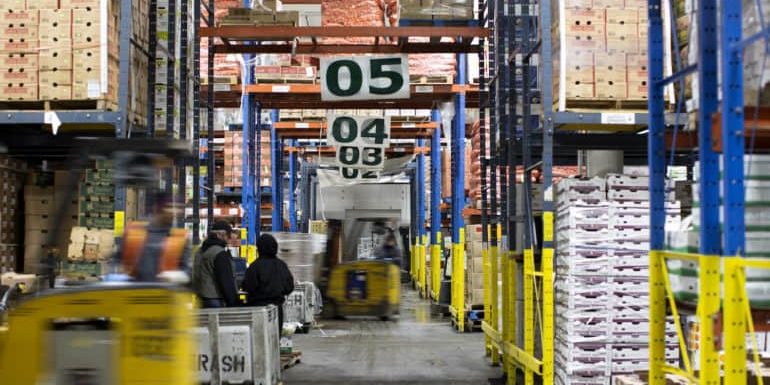 After the radical realization that food waste is still food, Baldor’s Bronx facility started diverting scraps away from landfills and into restaurants and juice shops, where they become perfectly edible ingredients.

Inside a massive warehouse in the Bronx, the food distributor Baldor processes a million pounds of produce a week, chopping carrots into carrot sticks, slicing oranges into wedges, and prepping strawberries for mixed berry boxes.
In the past, anything that was left—from carrot peels to strawberry tops—went into landfill. Now the company throws nothing away.
Every week, 150,000 pounds of what would have been food waste now become what the company calls “sparcs” (scraps spelled backward: their attempt at rebranding waste).

Carrot peels, for instance, are bagged into 10-pound portions and sold to chefs. “They could use that to make a carrot ribbon cookie, or make stock, says Thomas McQuillan, director of foodservice sales and sustainability at Baldor, who has spent the last year and a half getting the company to the goal of sending zero organic waste to landfill.

In D.C., the company Misfit Juicery buys Baldor’s carrot peels and other produce scraps to make cold-pressed juice. In New York City, the restaurant and cooking school Haven’s Kitchen buys “sparcs” for sauces, soups, and broths. Baldor dries other vegetable and fruit pieces into a flour-like blend that can be added to bread to make it savory and more nutritious, or used to make gluten-free products; later in 2017, some of those products will be available in retail stores. The remaining food scraps are made into animal feed for farms.

At first, Baldor considered composting the scraps. But hauling the food from the city to farms, they realized, would be expensive, and would add to the company’s carbon footprint. It also wouldn’t make the best use of it.

“One day I had an epiphany,” McQuillan tells Co.Exist. “I was thinking about all the different options—anaerobic digestion, et cetera—and I looked at the product and said: ‘It’s food. We need to treat it as food.'”

In addition to extending the use of produce, Baldor’s strategy makes economic sense: While in the past, the company had to pay waste haulers to take scraps away, their new methods are actually making money. “Food is an asset for a company like Baldor, or any other company that buys food,” McQuillan says. “It’s a major part of your asset, so you need to treat it responsibly, like everything else. When you start thinking about it in those terms, you say wait a minute, if I can glean a little bit more yield out of this product, I can make more money.”

The shift took time because the company had to rework its production lines. But the program now sends none of its produce to landfill. (If something falls on the floor in the production center, or if an item is rotten, it’s sent to the company’s “waste to water” machine, which turns food into a slurry that can be sent down the drain into the sewer.)

While the majority of Baldor’s “sparcs” are currently turned into animal feed, the company plans to keep increasing what it can turn into other food products. “If we can get people demanding a very large quantity of our dried vegetable blend, there might be nothing left for animal feed,” McQuillan says.

It’s a process that he thinks all food companies could follow. “Instead of composting being the number-one solution for these food processes, you move up to animal feed, and then you get better at it, and then you have less food available for animal feed as you feed humans,” he says. “That really becomes the goal: to be as efficient with these food processes as possible.”

Ultimately, attitudes about food waste also have to change: People need to recognize that some things that are normally thrown out, like carrot tops or potato peels, may even be more nutritious than the parts we typically eat. “A cultural-norm shift has to happen around food, and what we consider the edible parts of food and the inedible,” McQuillan says. “There’s a propensity in our culture to discard perfectly edible food.”