You are here:
Society 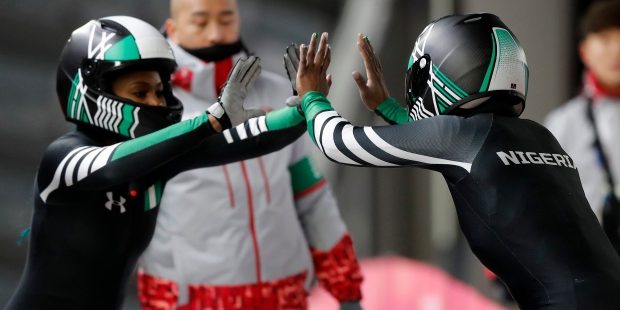 During the Pyeongchang Winter Olympics, the women’s Nigerian bobsleigh team made history by being the among the first Nigerian athletes to participate in the Winter Games.

Seun Adigun and Akuoma Omeoga did not win a medal but they marked history as part of the largest contingent of African countries in the history of the Winter Olympics.

Their story as the women’s Nigerian bobsleigh team captivated the games. Even if they didn’t win a winter medal, they have been praised as an inspiration for young women in Africa and around the world. With both Jamaica and Nigeria fielding bobsleigh teams, it could be the plot of an all-girl remake of Cool Runnings.

“Just because you don’t know what it means to see snow or to understand temperatures that are equivalent to ice, that doesn’t mean you have to shy away from it,” said Adigun to The Telegraph. It was not the victory they were looking for. “I don’t think it’s hit us how impactful this whole process will be in the long run,” Adigun, the pilot, said after the race.  That does not mean they were giving up and Adigun noted they had shaved a second off their training times. “That goes to show how dedicated and how resilient we’ve been on this whole journey,” she said. “The Olympic experience is really unique, it’s an experience you can’t really articulate,” said Omeoga, the brakewoman. “Nigerians are incredibly proud and I think one of our goals was to present Nigeria in a positive light. It gives people a reason to celebrate something.”

Omeoga was honored by the comparisons to the film Cool Runnings, which portrayed a fictional account of Jamaica’s bobsleigh debut at the 1988 Winter Olympics in Calgary. “That’s the legacy that we hope to have in 30 years to come,” she said.