If someone told you that flying is eco-responsible, would you believe it? Well, the first flight that does not emit polluting gases flew on September 24, 2020. The ” green ” airplane does exist.

Tourist trips, business trips, low-cost flights… the plane is everywhere. Fast, this mode of transport was used by 4.5 billion people in 2019. As a result, the pollution generated is also on a large scale. The carbon footprint of airplanes is such that they produce 2% of global greenhouse gas emissions and contribute 5% to global warming. And these figures will increase in the coming years if nothing is done, as the number of passengers is expected to double by 2037 according to the International Air Transport Association (IATA). Our society cannot do without air travel. So the ecological solution lies in a new model of commercial aircraft.

To counteract these forecasts, there is now a solution: the hydrogen-powered plane. This innovation was developed by the American start-up ZeroAvia. And the aircraft was designed as part of a research and development program supported by the British government (HyFlyer).

ZeroAvia flew the first emission-free aircraft for 20 minutes on September 24, 2020. This 6-seat plane is “clean”. It runs on fuel cells supplied by Intelligent Energy and with hydrogen transmitted by the European Marine Energy Center. The fuel cells only produce water and electricity, so there are no fossil fuel and no carbon dioxide emissions. 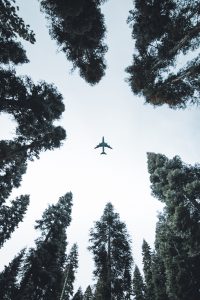 “Eventually, and without any new fundamental science required, hydrogen-powered aircraft will match the flight distances and payload of current fossil fuel aircraft,” the company said in a statement.

Making emissions-free commercial aircraft is therefore possible, all that remains is to extend it over the long haul and for more passengers. ZeroAvia is continuing its commitment by planning a 400-kilometer flight by the end of the year and then designing aircraft that can carry up to 20 people.

Air revolution? Looks like it. Airbus presented three concepts for a hydrogen-powered zero-emission aircraft on September 21. The goal is to offer the first commercial flight in 2035.