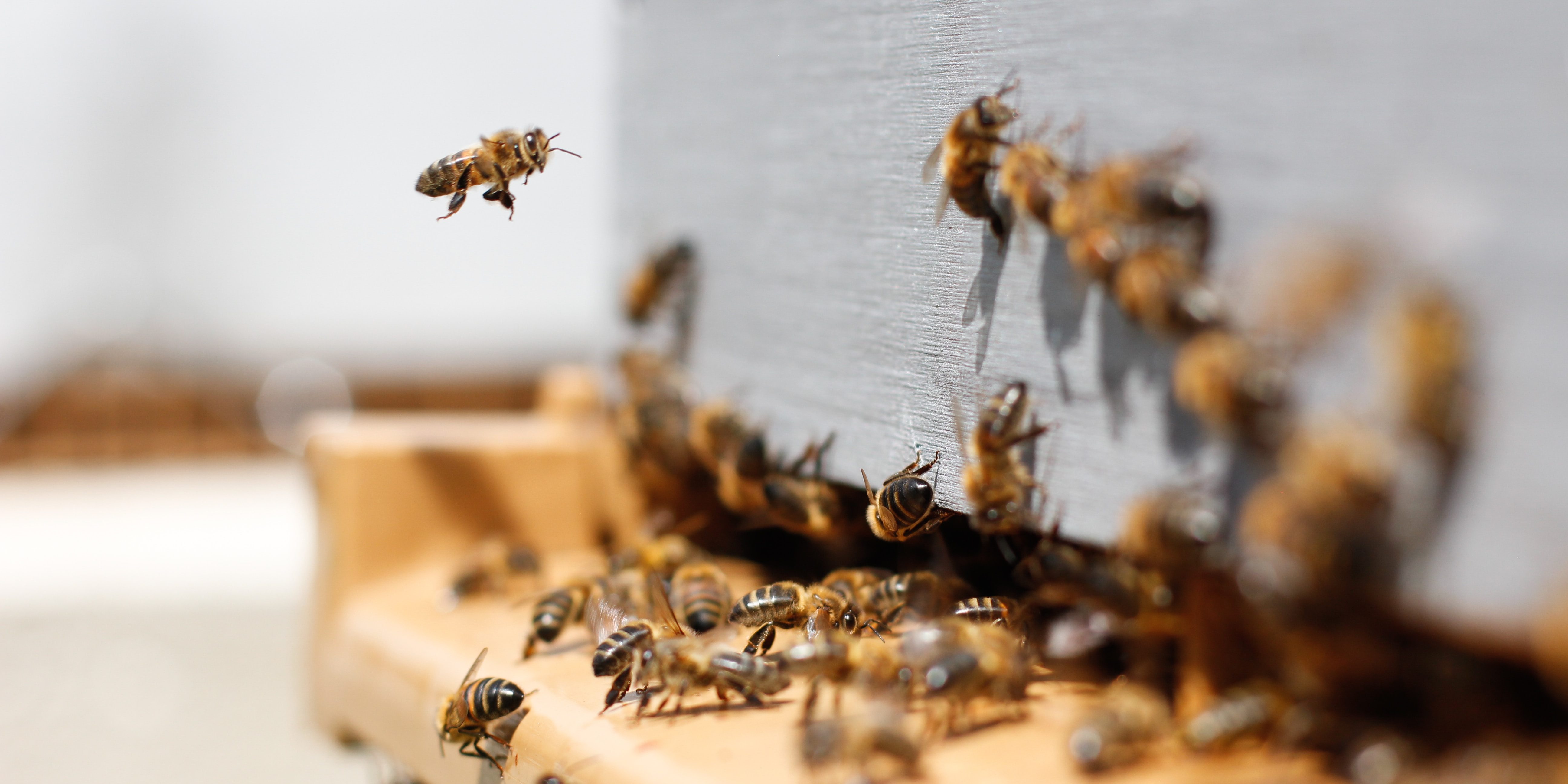 He is now making urban honey in Copenhagen : “When I’m with the bees, I forget the war.”

Three years ago, Aref Haboo worked as a beekeeper in Syria, tending to his 45 hives in a small village near the Turkish border. Now—having fled his war-torn home country and travelled to Denmark—he is still making honey and managing beehives on the roof of Copenhagen’s City Hall and in the blooming flower beds of the Tivoli Gardens.

His journey in 2013 from Syria to Denmark lasted two months. He left his family behind, fled through the desert, slept in cold, abandoned warehouses, and spent 35 hours in the cargo container of a truck traveling through Italy. The only things he carried with him were his passport and photographs of his bees.

“In one of the photographs I’m embracing a beehive,” says 42-year-old Aref with graying hair and deep brown eyes. “In another picture, my face is swollen from bee stings.”

Aref was granted asylum in Denmark and started as a language intern at Bybi, a social enterprise that uses bees to explore the biodiversity of Copenhagen. It also produces and sells quality honey, involving disadvantaged people in its production. Bybi’s founder, Oliver Maxwell, is inspired by the notion of a society where all members play a part, just as they do in a colony of honey bees.

“The bees are asleep right now,” explains Aref, standing in Bybi’s small factory in the Copenhagen suburb of Amager. It’s been a long time since he’s had a chance to see the bees. If you open a beehive in winter, you risk exposing the bees to cold shock and they will die. Even though Aref is an experienced beekeeper, he has had plenty of things to learn about bees in Denmark. The bees he grew up with in Syria look different, have a different lifecycle and behave differently. “Danish bees are mild but the Syrian ones are very aggressive,” he explains. One wrong move, and they will sting you; there is instant punishment for the careless beekeeper.

“I can’t count the number of times I’ve been stung in Syria but I got used to it, even if it looks pretty serious when ten bees have struck you at once.” Aref shows us pictures on his cellphone of Syrian plants and explains how each one contributes to the unique colours and flavors in honey. “One of the most beautiful aspects of honey production is that you can’t determine how the final product will look or taste,” he says. “That’s all up to the bees.”

Aref pulls out honey jars produced by Bybi. Even though all the honey is sourced from the same city, each of the sweet, sticky liquids has its own flavor and taste. The bees gather nectar from flowers along train tracks, private gardens, parks, and inner-city balconies. You can even taste the difference from one neighborhood to the next, and whether the honey is harvested in spring, winter, or fall.

The bees near Kongens Nytorv, a busy central square, produce a very light and floral honey, whereas the hives located by the Bella conference center are much sweeter and darker, probably due to nectar from wild flowers in the nearby parks.

A bee has an instinctive awareness of its role in the world. It toils until its death for the sake of the community, and it communicates with the rest of the colony through dancing. Bees can fly for up to 12 kilometers in their quest for nectar, but they are also rational beings who rarely travel further than necessary. On average, a honey bee only flies about a kilometer to find nectar. “The bee plays a crucial role in nature as a pollinator, ” says Aref, “and it produces honey which is an ailment for so many things. And bees are also mentioned in the Koran.” It was a school teacher in Syria who introduced Aref to the wondrous world of bees. He loved to study the myriad colours of the honey, eating it with olives or fresh yogurt. He would hand out his honey as gifts to family, visitors, and friends from the village. Despite all the nutritional qualities of the liquid gold, Aref would always attach a warning to the jars: too much of the good stuff could be bad for the heart.

When he left Syria, it was a country transformed. His village was empty of people. There was no water, heat, or electricity. Moving outside the village carried a lethal risk as the Islamic State continued to make inroads. “People used to set fire to their furniture in winter to keep warm. It was unbearable. It was not possible to feel human,” Aref says of the days just before he fled to find a place in Europe where his wife and three children could be safe.

Aref entrusted his friend who was staying behind in Syria, to look after the farm and beehives. It is now more than six months since he last heard from him. He hopes that the farm is still standing and that the bees regularly return to the hives with bellies full of nectar. But Aref can only hope. His village could easily have suffered the same fate as so many other places that have fallen into the hands of Islamic State which have been demolished.

The thought of returning to his home country inspires on Aref, but it’s getting increasingly hard to keep that ambition alive as war drags on. “My family and I are getting more and more attached to Denmark,” he says. “Perhaps my children will soon consider Denmark as the country where they truly belong.” That’s part of the reason why he is studying to learn Danish. He already understands a lot but can only say a few words.

He has grown fond of Danish honey but still misses the more dense kind back in Syria, so he is trying to import a few jars. Once the Danish weather escapes its gray winter freeze, Aref will again see the bees in full flight. There is something comforting about working in the factory, melting and molding new honeycomb frames, but he prefers to see bees when they are active. “When people feel bad and are in a bad mood, they might decide to take some time off work or go to the beach,” says Aref. “When I see bees flying off to find nectar, I feel better. When I’m with the bees, I forget the war and the tarnished country I left behind.” The honey production reminds him of who he really is. And when he eats honey, the memories of a peaceful Syrian nation come flooding back.

“Danish and Syrian honey are different, but when I taste honey from Bybi, it still brings me home to Syria. And to my own bees.”